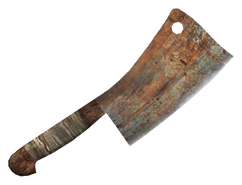 The Chopper is a weapon in Fallout: New Vegas, and is the unique variant of the typical cleaver.

The Chopper is an aged and rusted version of a cleaver with white tape wrapped around the handle, and with the blade curved upward. Additionally, it deals more damage than a normal cleaver, including higher Critical Hit and limb damage. It is a highly powerful melee weapon for the early game, as it deals high damage and can be easily repaired with the common cleaver.

It has a special Back Slash attack, which does 70% damage in V.A.T.S. at the cost of 5 fewer Action Points (requires a Melee skill of 50).

The Chopper can successfully strike about 1,245 times from full condition before breaking.

Cleaver, the standard variant found throughout the Mojave Wasteland.

Found at the Wolfhorn ranch, inside the farmhouse on the stove on the right wall of the house. It can be taken without Karma loss.

Location of the Chopper inside the Wolfhorn farmhouse
Add an image to this gallery
Retrieved from "https://fallout.fandom.com/wiki/Chopper?oldid=3306739"
Community content is available under CC-BY-SA unless otherwise noted.