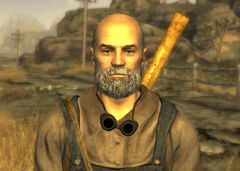 “Can't believe anyone actually made it through from the north being with all the deathclaws at the quarry.”

Chomps Lewis is the foreman of Quarry Junction living in the mining town of Sloan in 2281.

Head foreman of the Quarry Junction teams mining limestone to make concrete the for NCR's fortifications; Lewis found himself on indefinite leave after the Powder Gangers stole his team's entire supply of dynamite, and because of the shortage on dynamite, deathclaws infested the quarry grinding operations to a complete halt. They and the Powder Gangers are now holding up production of cement at the city and furthermore, traffic on the Long 15. His work seems to have no end of problems, as the morale of workers sagged due to not only being out of work, but out of power, and stuck in a holding pattern.[1]

When not mining Quarry Junction, Chomps runs a little side business acting as the middle man between his daughter, Melissa, and supplier Private Tyrone, trafficking drugs. His contact is shady, but things took a turn for the worse recently, as Tyrone outright cheated Chomps on the last shipment.[2][3] He is fairly sympathetic to the Great Khans as well. His daughter Melissa is a courier for the Great Khans and although he disapproves of her lifestyle, he understands that only she has the authority to make decisions impacting her life. No longer entitled to continue to keep tabs on her daughter's activities, the foreman is glad that she is making her own way in the world.[4]

Despite its proximity, Chomps does not recommend visiting New Vegas. Speaking from experience, he states that it is a good way to burn through a month's pay in minutes, and has seen more people on their way thinking it's going to be nothing but an easy ride to the top.[5]