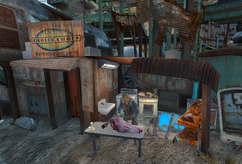 Choice Chops is a butcher's shop in Diamond City operated by Polly in 2287. She sells cuts of meat from a wide range of animals but specializes in brahmin meat which is sourced from the Codman family farms.

To the front of the rusting metal clad building is a covered shop area consisting of a table Polly works on, an old fridge, cooker, rusty barbecue, and sink. This is where she prepares the meat for sale to the passing public during the day. A front door (Novice lock) leads into the interior (Polly's house) with a painted billboard above it bearing the establishment's name and declaring "We offer the best choice lean cuts."

There are a few pre-War style advertisements stuck to the frontage declaring "Always pleased to 'Meat' you!," "Butcher on duty" and "Come in, we're FRIENDLY" which is rather ironic given Polly's brusque nature.

A couple of metal advertising boards (both in the shape of a brahmin and one showing the various cuts and weight of each) are attached to the tin roof. There is a trailer on the east side of the roof which acts as the meat locker that is locked (Novice). An extinguisher can be found near the meat. The roof can be easily accessed from the rear and a locked hatch (Novice) provides a more discrete entrance to the building.

The interior consists of one open room with various rusting metal shelves used for storage, a dilapidated kitchen area with meat joints on the work surface, and a small living space including a bed at the back. There is a locked (Easy) terminal on the east wall. A metal ladder leads up to the roof, presumably for access to the meat locker.

Choice Chops appears only in Fallout 4.

Meat locker interior
Add an image to this gallery
Retrieved from "https://fallout.fandom.com/wiki/Choice_Chops?oldid=3253778"
Community content is available under CC-BY-SA unless otherwise noted.