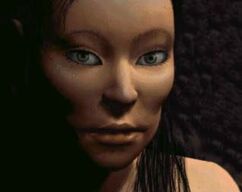 “Chitsa has learned to deal with the perils of traveling the Wastes. Now the tribe needs help and new paths beckon to Chitsa.”— Character selection description

Chitsa is one of three pre-made player characters available to be the Chosen One during character creation in Fallout 2.

Chitsa has always been able to convince others to do things her way. Her winning personality and stunning good looks have often caused others to underestimate the tribe's best trader.

In the course of her frequent journeys, Chitsa has learned to deal with the perils of traveling the wastes. Despite her youth, Chitsa can stand her own.

She does not possess the strength or endurance of a warrior, but her sharp tongue can easily strike fear into the hearts of men. Chitsa's remarks are as sharp as a hunter's spear, and her looks kill swifter than poison arrows.

Chitsa appears only in Fallout 2.

Retrieved from "https://fallout.fandom.com/wiki/Chitsa?oldid=3341193"
Community content is available under CC-BY-SA unless otherwise noted.