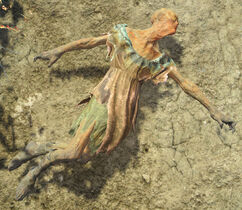 Chipmunk (real name Mike[1]) was a member of the Animal Friends and Defenders holding Dr. Hein hostage at the Angry Anaconda in 2077.

In the early hours of October 23, 2077, the day of the Great War, a member of the AFAD sent a message by phone to Dr. Hein posing as an employee who required assistance in treating an injured escaped animal at the Angry Anaconda construction site.[2] At least four A.F.A.D activists, Chipmunk, Rabbit, Robin, and Mouse then held Dr. Hein hostage.[1] During the sequestration of Dr. Hein, Rabbit accidentally revealed that Chipmunk and Robin's real names were Mike and Ingrid. At some point, the Nuka-World security team was alerted to the situation.[3]

A feral ghoul named Chipmunk can be spawned with the console. It may have been intended to be an enemy before being cut from the add-on.

Chipmunk is heard only in the Fallout 4 add-on Nuka-World.

Retrieved from "https://fallout.fandom.com/wiki/Chipmunk?oldid=3176383"
Community content is available under CC-BY-SA unless otherwise noted.