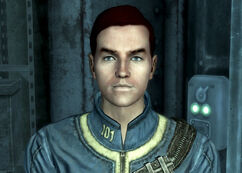 Chip Taylor was a resident of Vault 101 and was a year or two younger than the Lone Wanderer before his death. He aspired to be a mechanic like Stanley. However, he was killed in the chaos as Vault 101's rule of law broke down.[1]

He is found dead next to the one of the entrances to the upper level during the player character's visit of Vault 101 in Trouble on the Homefront.

Chip Taylor appears only in Fallout 3.

Retrieved from "https://fallout.fandom.com/wiki/Chip_Taylor?oldid=3208789"
Community content is available under CC-BY-SA unless otherwise noted.