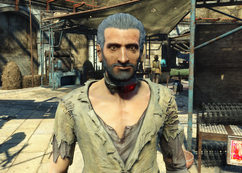 Chip Morse is a repairman in Nuka-World in 2287.

Chip Morse has lived in Nuka-World for the last twenty years, making a living effecting repairs for whomever currently rules the park. He is aware of Colter's plans to restart the Nuka-World power plant, thus increasing the defenses and presence of the park, making it a potentially major trading hub.

Chip Morse appears only in the Fallout 4 add-on Nuka-World.

Retrieved from "https://fallout.fandom.com/wiki/Chip_Morse?oldid=3388543"
Community content is available under CC-BY-SA unless otherwise noted.