“Ah, you must be the outsider. I am Ching Tsun, a fellow student in the art of war. You see, I design and repair weapons. Perhaps you are interested?”— Ching Tsun

Ching Tsun is the weapons engineer of the Secret Vault in 2208.

Ching Tsun is a very talented weapons engineer who likes to manufacture and repair weapons. Busy in his lab, he asks the Initiate to bring him some junk metal parts found in the Secret Vault, so he could create something new from them. He always carries a continuous fire laser and is very proud of it.

Later, when the people of the Secret Vault hiding in the garden area start to evacuate, the Attis army found and attacked them, and he remained in the garden to give the people time. Using his continuous fire laser, he killed some of the super mutant attackers, but was killed by one of them, stabbed in the back by an axe-like weapon.

Ching Tsun appears only in Fallout: Brotherhood of Steel. 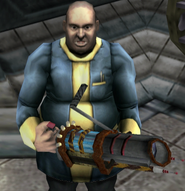