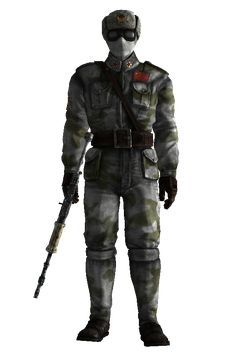 Chinese technicians are Chinese personnel encountered in the Listening Post in the Anchorage Reclamation simulation in 2277.

The technicians keep the post operational and make sure everything is up to code.

Chinese technicians appear only in the Fallout 3 add-on Operation: Anchorage.

Retrieved from "https://fallout.fandom.com/wiki/Chinese_technician?oldid=3236267"
Community content is available under CC-BY-SA unless otherwise noted.