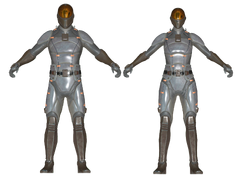 The Chinese stealth armor is a piece of armor in the Fallout 4 Creation Club content "Chinese Stealth Armor."

The armor is a form-fitting armored jumpsuit, with stealth camouflage system embedded. It generates a modulating field that transmits the reflected light from one side of an object to the other, making a person much harder to notice (but not completely invisible). The technology was the basis for the unstable "Stealth Boy" wrist units developed in the U.S. It provides 60 ballistic defense.

This armor can be modified with ballistic weave, and has several different levels of upgrades depending on the ranks in the Armorer perk.