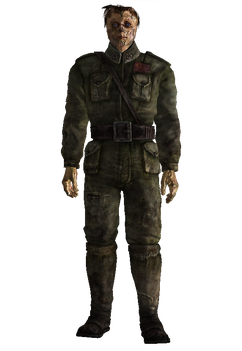 Chinese remnant soldiers are ghoulified Chinese survivors of the Great War in 2277.

Two hundred years after the Great War, a Chinese remnant still resides in Mama Dolce's processing plant in the ruins of Washington, D.C.. Composed of ghoulified Chinese spies, intelligence agents, and special-ops soldiers abandoned on foreign soil by the People's Republic of China, the remnant is oblivious to the fact that its original mission of espionage has become rather pointless in the aftermath of the Great War. As a result, the soldiers have occupied the food processing plant since 2077 and fiercely defend it against all intruders.

Retrieved from "https://fallout.fandom.com/wiki/Chinese_remnant_soldier?oldid=3236258"
Community content is available under CC-BY-SA unless otherwise noted.