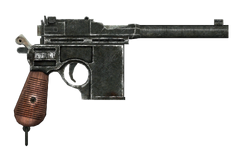 The Shanxi Type 17 Chinese pistol is a weapon in Fallout 3.

Originally produced in 1929 by the Taiyuan Arsenal for the army of Yan Xishan, this pistol is now a relic of the Sino-American War. The Shanxi Type 17 was a mass-produced sidearm before the Great War.

While the Chinese pistol is not very useful as a weapon, they are relatively lightweight and can be collected, repaired, and sold to provide an early source of caps, or simply saved to repair the Zhu-Rong v418 Chinese pistol.

The Chinese pistol can fire a total of about 1250 rounds, the equivalent of 125 reloads, from full condition before breaking.

Chinese pistol in Mick's "special" store
Add a photo to this gallery
Retrieved from "https://fallout.fandom.com/wiki/Chinese_pistol?oldid=3359892"
Community content is available under CC-BY-SA unless otherwise noted.