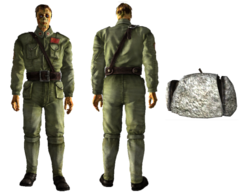 The basic People's Liberation Army uniform is a single piece jumpsuit, whose design is based on the Mao Suit. It has four large front pockets, arranged symmetrically, the Chinese flag over the upper right pocket, and is typically worn together with a large leather belt, sash, and a commando hat.

Each jumpsuit seen in America carries the insignia of the Chinese 127th Iron Division on the right sleeve and has two red stars on the collar.

Also called the "Ushanka" in Russian, this hat provides the wearer with phenomenal cheek and ear protection and is often made from animal furs and hides (such as rabbit or sheep). Can be found in:

It is a modified Zhongshan suit (named after Sun Yat-Sen, founder of the Chinese Nationalist Party). Mao Zedong has always been associated with this suit in the Western press and thus it was incorrectly named after him as the Mao suit in the English language. 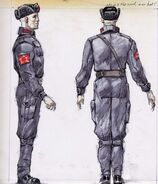 Dirty Chinese jumpsuit
Add a photo to this gallery
Retrieved from "https://fallout.fandom.com/wiki/Chinese_jumpsuit?oldid=3502705"
Community content is available under CC-BY-SA unless otherwise noted.