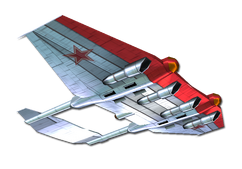 Chinese bombers were vehicles utilized by the People's Republic of China during the Resource Wars. The bombers that appear in the Operation: Anchorage add-on are purely a script, operating in a similar manner to birds that appear over places like Megaton and so can not be engaged by the Lone Wanderer.

During the Battle of Anchorage, several Chinese bombers can be seen circling the battlefield overhead, dropping their payload on coordinates delivered from the local listening post. Others are seen circling over the U.S. Army outpost. The Lone Wanderer cannot interact with the aircraft in any way.

Six bombers passing above the American HQ in formation 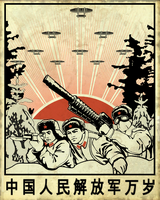