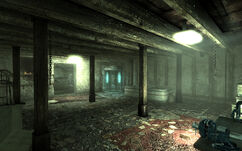 Hatch entrance to the bunker

“Agent, if you're receiving this message, then our satellites have registered the destruction of your objective. Well done. Please report to my personal bunker, hidden among the grounds of Calvert Mansion. Coordinates have been provided with this transmission.”— Terminal entry for Jiang

The Chinese Intelligence bunker is a location in the Fallout 3 add-on Point Lookout.

This location is a secret pre-War Chinese bunker under the ornate hothouse next to Calvert Mansion. It requires a special code (see The Velvet Curtain) and the cryptochromatic spectacles to get in through the secret door. Inside is a large number of stacked ammunition boxes and loot. There is a lone protectron inside that will ask for a secret password which, when given, will lead the Lone Wanderer to a room downstairs for extraction orders.

The Chinese intelligence bunker appears only in the Fallout 3 add-on Point Lookout.

The atrium outside, containing makeshift bedding and small crates of loot
Add an image to this gallery
Retrieved from "https://fallout.fandom.com/wiki/Chinese_Intelligence_bunker?oldid=3185348"
Community content is available under CC-BY-SA unless otherwise noted.