The Chimera is a modified mining rig with a mounted laser cannon, acting as a Chinese battle tank in the Fallout 3 add-on Operation: Anchorage.[1]

It was included in the Anchorage Reclamation simulation created by VSS at the behest of General Constantine Chase.

Originally, it was a mining rig.[1] The Chinese had refitted the vehicle with long range weapons and reinforced armor.[1]

The Chimeras are considered robots and can be disabled with the Robotics Expert perk.

A cut reconstructed audio log mention the tanks, the voice line stating, "Chimera Tanks? Come on, man, even you have to admit these are sheer fantasy."[2]

The tanks may not be hostile towards the player when first encountered.[verified] 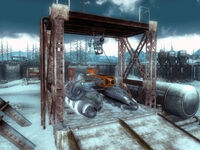 A Chimera still in its dock 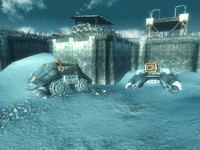