“You have killed children, the youth of the wasteland. This is considered to be a really bad thing. You evil, evil person.”— Fallout and Fallout 2 description

Childkiller is a Reputation title in Fallout and Fallout 2.

The player character receives this title by killing a child in game.

A new Vault Boy image for the Childkiller title was created for Fallout 2 but was never used.

“This image was unused and the only Vault Boy image to ever be cut from Fallout 2. (I'm sure you can figure out why) I remember when I got the request to do a perk illustration for "Child Killer" that there would be no way to keep in from being offensive. I mean really! How do you make an illustration of "child killer" and keep it from being offensive? Anyway for some reason, I thought this was the least offensive way to do it. I have no idea what I was thinking. Even the designer who requested it realized it was a bad idea, so we fixed it. Looking back on it now, I can't believe I drew this.”— Brian Menze on The Vault 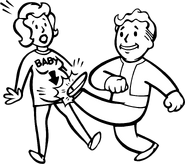 Unused Vault Boy image
Add an image to this gallery
Retrieved from "https://fallout.fandom.com/wiki/Childkiller?oldid=3140595"
Community content is available under CC-BY-SA unless otherwise noted.