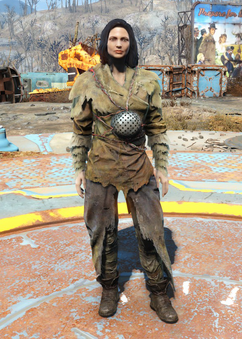 The Child of Atom rags are a collection of nine Children of Atom outfit variants in Fallout 4.

The Child of Atom rags provide a bonus of 25 to Radiation Resistance and increase Endurance by 2. It cannot have armor pieces worn over it, but can be modded by the ballistic weave perk. It appears as long robes made of hide or leather.

The short rags have the same stats as the long rags and cannot be worn with armor over it. They appear as a short tunic with hide pants and boots.

These rags have the same stats as the long rags and cannot be worn with armor over it. They lack the metal colander worn over the chest seen on most other rags. Shows no order of power; those in different color rags are not more important than others.

The Children of Atom do not rely on their rags for radiation resistance, as pickpocketing them has no effect. They appear to gain full immunity to radiation automatically as a member of the group or faction.