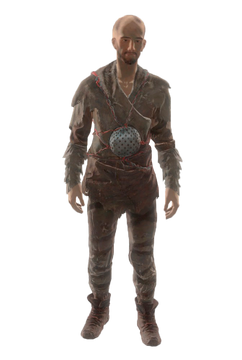 Children of Atom are characters appearing in Fallout 4.

The Church of the Children of Atom is a religion that worships a deity known as Atom and radiation, which they call "His Glow" originating from the town of Megaton in the Capital Wasteland. In the decade since the battle for Project Purity, the religion has expanded to all over the Commonwealth, settling in places ranging from the Crater of Atom in the Glowing Sea to all the way up to The Nucleus in The Island. The Children have sent preachers to various areas outside the Glowing Sea,[1] although the outcome of these expeditions are not always peaceful, as travelers who cross paths with the Church are often met with suspicion and hostility.

Children of Atom are hostile to the player character, with the exception of the Crater of Atom in the Glowing Sea, The Nucleus and Brother Henri inside the Sentinel site, who can be aggravated to attack, but can become so through dialogue.

The Children of Atom appear in Fallout 4.

Retrieved from "https://fallout.fandom.com/wiki/Child_of_Atom_(Fallout_4)?oldid=3122090"
Community content is available under CC-BY-SA unless otherwise noted.