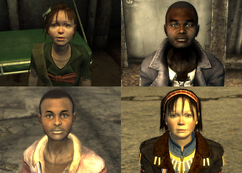 Children are the young inhabitants of the wastes.

Differences between the games[edit | edit source]

Children may be killed in the first two Fallout games. Killing them gives the player character the Childkiller reputation. Children in Fallout 3, Fallout: New Vegas and Fallout 4 are marked as essential, however, they are also coded so that they cannot be hurt by any kind of attack. They will react to the player character or another NPC assaulting them, always fleeing instead of retaliating against their assailant. The only child that can die in Fallout 3 is the Lone Wanderer in Tranquility Lane, a virtual reality simulation.

Bethesda faced a similar problem when making The Elder Scrolls IV: Oblivion. They considered adding children to make the game more realistic, but this was a controversial choice: if the children could be killed, Bethesda likely would have been subject to serious controversy and legal problems that would arise from making it possible to murder juveniles in the game. Bethesda's response was to simply make the characters invincible. This once again raised issues, because the tactic would undermine the purpose of adding children in the first place, namely, realism. Eventually, Bethesda scrapped the idea for The Elder Scrolls IV: Oblivion altogether, but in Fallout 3 they went the other way, allowing children for authenticity, but making them invincible. This is the same in Fallout: New Vegas. In Fallout 4, children remain invincible, but they, like in previous games, will react to being assaulted. They will always cower and flee instead of retaliating against their attacker.

Child in Fallout and Fallout 2

Two children in Vault 81 in Fallout 4

Brotherhood squire aboard the Prydwen in Fallout 4
Add a photo to this gallery
Retrieved from "https://fallout.fandom.com/wiki/Child?oldid=3350768"
Community content is available under CC-BY-SA unless otherwise noted.