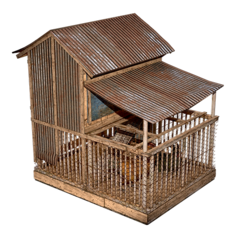 The chicken coop is a settlement object that first appeared in the Fallout 76 update The Legendary Run.

A small wooden hen house with a roof and comes with two chickens. It produces up to 33 raw fertilizer per hour.

The chicken coop was previously unlockable upon reaching rank 78 during the first season. With the release of One Wasteland For All, a plan for the coop was integrated to the game for those who did not unlock it during the previous season.

Retrieved from "https://fallout.fandom.com/wiki/Chicken_coop?oldid=3337033"
Community content is available under CC-BY-SA unless otherwise noted.