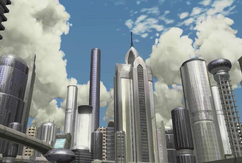 Pre-War Chicago as shown in the Fallout Tactics intro 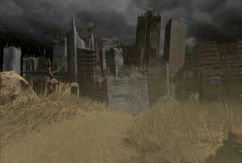 Post-War Chicago as shown in the Fallout Tactics intro

Chicago was a city located in the pre-War state of Illinois.

Before the Great War, detective Nick Valentine together with his fiancé Jennifer Lands transferred from the Chicago Police to Boston to assist the Boston Police Department in Operation Winter's End.

Sometime after the defeat of the Master in 2162, the Brotherhood of Steel dispatched at least one airship east, to track down the remnants of the Unity super mutant threat. The airship crash landed near the ruins of Chicago.[1] The survivors initially organized themselves into a new detachment, but by 2254 they had gone rogue, cutting all contact with the larger Brotherhood.[2][3]

The Enclave maintains outposts within the ruins.[4] There is also a West Coast super mutant population,[5] that the Brotherhood fought or assimilated.[2] It is also where Tommy recovered ED-E, and after pleading with his father, brought it back to his mother's garage for repairs.[6]

Chicago is based off Chicago, Illinois, in the Midwest United States.

Destruction of Chicago
Add a photo to this gallery

Retrieved from "https://fallout.fandom.com/wiki/Chicago?oldid=3412521"
Community content is available under CC-BY-SA unless otherwise noted.