Cheyenne Mountain is the first part of the nineteenth and final mission in Fallout Tactics.

This mission includes two other areas, and is quite long. This area is the "outside" section.

It is a good idea to have Rad-X for each squad member. You will also want a character with a decent Science skill for the next area. If you've been using all of your Big Books of Science on one character that's plenty. For the final area, you will need a way to damage objects that you can't explicitly target. A Browning M2 or grenades work well. You can also pick up the Vindicator minigun and ammunition from enemies. This is a long mission, and you will really only find microfusion cells, .50 cal, 2mm EC, and 7.62mm ammunition in quantity, so if you are using weapons that don't use these kinds of ammunition be sure to bring a healthy supply. For the Barnaky ending, you will need Simon Barnaky's locket or letter. 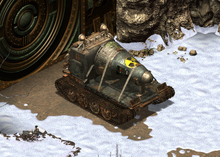 The first objective more or less requires you to clear the path for the carrier. Enemies in this area are mostly humanoid robots except where noted. The carrier is pretty flimsy, and if it is destroyed the mission is over, so it is best to be relatively thorough when clearing the area so that you don't get surprised while driving. You can leave the carrier at the bottom of the map until ready, you don't want to trigger it early.

Notable encounters along the path:

Road along the west side of the map

The road then winds up the map.

The last bend in the road (the northeast corner of the map) has some major defenses, including a behemoth and two turrets. Most of the turrets during the mission are powered by generators. There are three such generators. Destroying them powers down the turrents. 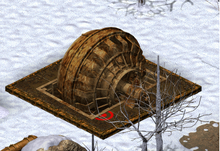 The door itself is guarded by a humanoid robot and two hover robots, all firing rockets. You can also snipe these from the top of the cliff relatively safely.

Once you are sure the path is clear for the carrier, and before proceeding with driving the nuke carrier into position, move all but one member of your squad into the safe bunker, which has a few easy guards and some useless terminals. Take one character and use them to drive the nuke carrier into position. The character will have to get out of the carrier and run to the ladder near the farmhouse on the ledge, so make sure they aren't encumbered and you're familiar with the path to take.

Have everyone use a Rad-X, drive the carrier into position, and run the driver to the ladder for the safe bunker. You have 60 seconds to make the run, so micromanage that character. It's possible that the back door to the bunker has to close to keep the squad safe. Once the nuke is detonated, you will automatically be moved to the next area.

Alternatively, clear the path of robots and then bring the carrier into position. This saves you the trouble of having to protect the carrier.

Northwest of the entrance to this mission, near where you find the nuke carrier, there are several invisible / deactivated NPC enemies. Players using turn-based mode will encounter these deactivated NPCs as soon as they encounter the two (visible) robot humanoid enemies at the first bend in the road. These deactivated NPCs cannot be targeted or hurt, but they will fire rockets, plasma, and mini-guns at your squad doing considerable damage as long as your squad is in range. The only way to avoid these NPCs is to play in CTB mode until you are well clear of the area they are in. This is the same game engine bug that affects the Osceolla mission after Gammorin is killed. 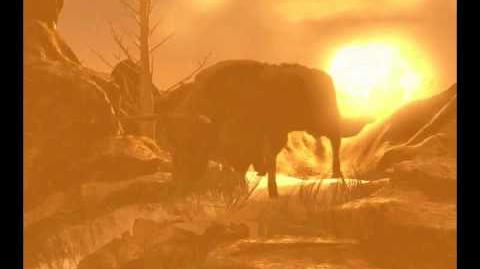