Cherry Liquor was a pre-War company.

Cherry Liquor was a chain of at least two liquor stores. These stores sold beverages like beer, wine, Nuka-Cola and Sunset Sarsaparilla.[1]

It has two known stores which are unmarked locations in Freeside. One is found on the main road to the Strip and the other can be found next to the Atomic Wrangler Casino. Both buildings are inaccessible. 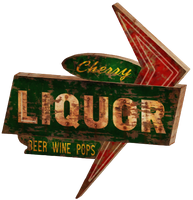