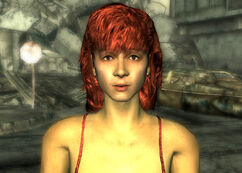 “Of course. Why else would I stay with the old fart? You don't think I actually love that bastard, do you?”— Cherry, Referring to Dukov

Cherry is a 27-year-old woman living at Dukov's Place in the Capital Wasteland in the year 2277.

Cherry was born in the year 2250. A live-in playmate, Cherry neither loves Dukov nor likes him, as she often refers to him in a negative way. She mostly stays with him for the money and the modest protection he can give her. In exchange, she offers what she can. Dukov prefers that his "ladies" walk around in their underwear.[1]

Cherry has fantasies about traveling to Rivet City but knows that it's too dangerous to travel alone and that she may not survive the trip without help.

Cherry appears only in Fallout 3.

If Dukov is killed while she is following the player as a companion, once brought to Rivet City she will thank you for saving her and then turn hostile. [verified]

Retrieved from "https://fallout.fandom.com/wiki/Cherry?oldid=3244212"
Community content is available under CC-BY-SA unless otherwise noted.
... more about "Cherry"
RDF feed
Has platform
PC +, Playstation 3 +  and Xbox 360 +