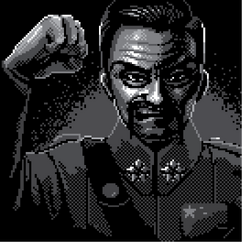 Propaganda depiction of Chairman Cheng from the video game Wastelad

“We excel at destroying the old world, and we excel at building a new one.”— Entry in Irving Cheng's terminal at Tenpenny Tower, Fallout 3

Chairman Cheng was the leader of the Communist Party of China from at least 2063[1] until the Great War in 2077.

Under his rule, China clashed with the United States in the Sino-American War, invading Alaska in 2066.[2] Despite initial successes, the Chinese military was forced into a stalemate by the American defenders and eventually beaten back all the way to the Chinese mainland. Despite that, even as late as 2077, Chinese troops continued to fight in Chairman Cheng's name, indicating he held onto power despite the looming defeat.[3]

Chairman Cheng is mentioned in Fallout 3, its add-on Operation: Anchorage, Fallout 4 and Fallout 76.

Retrieved from "https://fallout.fandom.com/wiki/Cheng_(Chairman)?oldid=3268691"
Community content is available under CC-BY-SA unless otherwise noted.