The chemistry station is a constructible settlement object and crafting table in Fallout 4.

The chemistry station can be used to create items containing chemical compounds, including chems, grenades, mines, stimpaks and syringer ammo. When a chemistry station is in an owned settlement, its contents are shared with the location's workshop and crafting stations.

There are two variants of the chemistry station; however, they both function identically. Constructing one yields 28XP.

All XP amounts are shown for character with 1 Intelligence.

Ammunition for the Acid Soaker, available with the Nuka-World add-on.

Although these recipes are found under the drugs subcategory in the chemistry station, these items are more commonly known as chems in the Commonwealth.

With the Contraptions Workshop add-on, fireworks can be crafted and shot out of specific launchers.

¹This crafting recipe will only appear with a HalluciGen gas canister in the inventory.

Although listed under healing in the chemistry station, these items are listed under Aid in the Pip-Boy and containers.

Ammunition for the Nuka-nuke launcher, available with the Nuka-World add-on.

With the Far Harbor add-on, sludge recipes can be unlocked by reading a copy of the Islander's Almanac issue, Recipe Roundup.

Stronger ammunition for the Thirst Zapper, available with the Nuka-World add-on.

Traps can be crafted with the Far Harbor add-on.

¹This crafting recipe will only appear after one has acquired The Striker.

With the second level of the Local Leader perk, the Sole Survivor can craft chemistry stations in other settlements. Although they can be constructed at any settlement the player character is allied with, the following locations come with a pre-existing chemistry station: 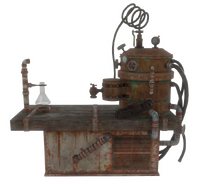 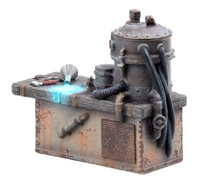