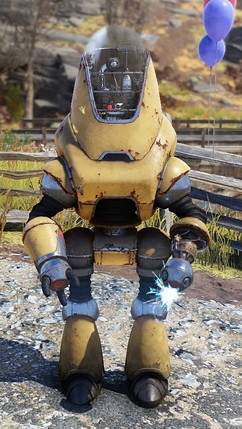 “"*Bzzzzzzzzzzzzzz* *Bzzzz* *Bzzzzzzz* Yes, young ones, I can communicate with bees. I told them to make sweet honey. Tell your parents to buy some."”— Cheerful Beekeeper

Cheerful Beekeeper is a protectron operating in Helvetia as part of the Fasnacht Day festivities in 2103.

Cheerful Beekeeper is one of the protectrons which was reprogrammed to spice up Fasnacht Day celebrations in Helvetia.[1][2] It is distinguishable by its yellow chassis, stun gun in place of its left hand, and swarm of bees that surround it at all times.

In 2102, the Cheerful Beekeeper wore the Fasnacht sun mask when marching in the parade. In 2103, the protectron wears a random Fasnacht mask with an alternate color scheme.

Cheerful Beekeeper appears only in Fallout 76.

Retrieved from "https://fallout.fandom.com/wiki/Cheerful_Beekeeper?oldid=3232807"
Community content is available under CC-BY-SA unless otherwise noted.