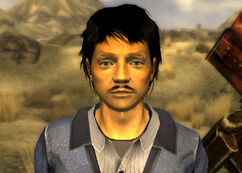 “Letting you just walk away isn't how it works, I'm afraid.”

Chavez formed a splinter gang with a small crew of fellow escaped convicts that have moved south of the NCR Correctional Facility to plunder passing-by traders and other Mojave inhabitants. Chavez and his crew decided that instead of turning in their "acquisitions" to Eddie, they would keep it all for themselves.

There was originally an option that Chavez could have been imprisoned during I Fought the Law, but this was cut from the game.[1]

Retrieved from "https://fallout.fandom.com/wiki/Chavez?oldid=3325727"
Community content is available under CC-BY-SA unless otherwise noted.