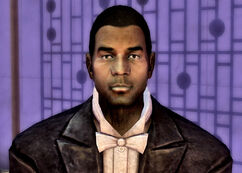 “Those are all members of the White Glove Society. Our founder, Marjorie, gave us all a dress code. There's only one rule to it. In her words, we must dress in such a way that no one can be said to have dressed better than us.”

Chauncey is a member of the White Glove Society and resides at the Ultra-Luxe in 2281.

Chauncey is a White Glove who objects to Mortimer's cannibalistic ways. He wants to stop Mortimer from returning to feeding on humans. Chauncey was complicit in recent Strip kidnappings and has intimate knowledge of the group's transgressions. Recently he has fallen out of favor with Mortimer and subsequently, an assassin was hired to kill him after a meeting with the Courier in the pool area steam room at 4 PM.

Beyond the Beef: After finding the matchbook on the detective the player will find Chauncey in the steam room waiting. After the meeting, The assassin Mortimer hired to assassinate Chauncey will come in and kill him with a silenced .22 pistol.

Retrieved from "https://fallout.fandom.com/wiki/Chauncey?oldid=3338141"
Community content is available under CC-BY-SA unless otherwise noted.
... more about "Chauncey"
RDF feed
Has platform
PC +  and Xbox 360 +