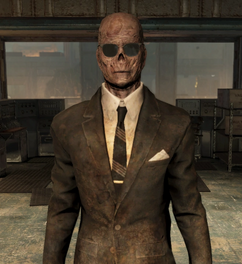 Chase "Digger" Terrier is a Secret Service agent in Appalachia in 2103.

Chase is one of the Secret Service agents located in Vault 79, now a ghoul. He survived Shorty's mutiny years prior and was in the vault reactor area when it began to malfunction. Though the others he was with died (like Grills and Shiny) or turned into feral ghouls (like Bubba and Mac),[1] he alone managed to survive with his sanity intact and eventually stabilized the reactor.[2] However, Chase refuses to finish fixing the reactor because he is afraid he could turn feral if he attempts to.[3] He is a tinkerer or inventor of sorts, as he had attempted to make an automated vacuum cleaner (later made into a scrap heap upon eating Derek Garrison's shoes),[4] and later made a crib and toys for Maggie Stern before she was born.[5]

Chase Terrier appears only in Fallout 76, introduced in the Wastelanders update.

Retrieved from "https://fallout.fandom.com/wiki/Chase_Terrier?oldid=3371637"
Community content is available under CC-BY-SA unless otherwise noted.