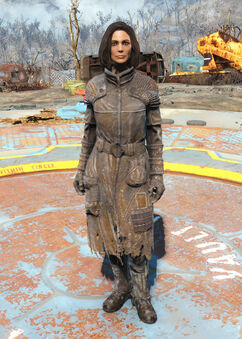 Chase's uniform is an outfit in the Fallout 4 add-on Far Harbor. It is a worn-out version of the Courser uniform, the standard armored coat usually worn by Coursers. It is decorated with Acadia's insignia.

It provides the same resistances and bonuses as the standard Courser uniform, namely a Damage Resistance of +30, +15 Energy Resistance and +15 Radiation Resistance, as well as a bonus of Endurance +1 and Perception +1. It is also much dirtier and worn in appearance than the original Courser uniform. It is not modifiable.

The uniform is worn by Chase in Acadia, where it can be looted off her corpse or pickpocketed off her with rank 4 of the Pickpocket perk.