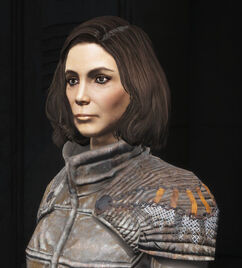 “I used to be a Courser, returning synths that had escaped from the Institute.”— Chase

Chase is a former courser who lives in Acadia in 2287.

Chase is a member of Acadia. She was once a courser, working for the Institute, until she met DiMA and was convinced of his mission. She cut all ties with the Institute and is now helping the escaped synths travel safely to Acadia.

Chase appears only in the Fallout 4 add-on Far Harbor.

Chase's appearance is based on her voice actress April Stewart.

Retrieved from "https://fallout.fandom.com/wiki/Chase?oldid=3293700"
Community content is available under CC-BY-SA unless otherwise noted.