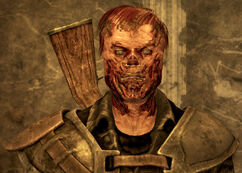 “You are my employer, and I will do as you command.”

Charon is a possible companion and the ghoul bouncer of The Ninth Circle in 2277.

A quiet and intimidating ghoul, Charon is Ahzrukhal's personal bodyguard and soldier. Every couple of days, Ahzrukhal sends Charon out to run some kind of errand. He always leaves packed with weaponry, and returns with a bag of caps. He's loyal to whoever holds his contract beyond question and will do whatever his employer orders. Charon never sleeps - a strange trait even for a ghoul - and when he's in Underworld, he hangs out in the bar. There are rumors that he is unhappy with his position but can't leave Ahzrukhal's employ.[1]

Although little is said about Charon's past, Ahzrukhal will tell the Lone Wanderer that he was raised by a group of people who brainwashed him into obeying whoever has his contract. Ahzrukhal insists that he is not a slave, and implies that Charon did something in the past to deserve his "employment" with Ahzrukhal. While the terms of the contract are never shown, if Charon is asked to retrieve the G.E.C.K. in Vault 87, he says that he is only good for combat services and that he is "nobody's errand boy."

At The Ninth Circle, he is the bouncer. He stands in the corner until needed. If dismissed by the Lone Wanderer, he will return there and sit in a nearby chair.

Ending slides of Charon activating Project Purity! during Take it Back!