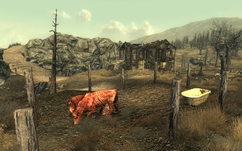 The charnel house is a ruined building in Fallout 3. It is located southwest of Fort Bannister, northwest of Evergreen Mills, and east of the yao guai tunnels.

The two-level house is occupied by raiders who have secured the entrances with frag mines. The raiders keep a guard dog that can be seen herding the brahmin nearby. There is often a lookout/sniper stationed on the rock behind the house. The source of Signal Papa November is located near the radio tower to the west of the charnel house. The signal, which sounds like Morse code, can be activated by throwing the electrical switch at the tower.

To the north-northwest is a ruined house that has been reinforced with sandbags. The fenced-in field in front of the house is mined. Beds and most of the other items and containers are owned and taking them causes the loss of Karma, as this is the home of a scavenger. There is a set of recon armor or other leveled armor in one of the footlockers.

The charnel house appears only in Fallout 3.

A charnel house is a term often used to refer to a vault or building to store corpses, allowing them to decompose without endangering the health of others. Also used simply to describe a location associated with death and destruction.

Duck and Cover! inside the charnel house
Add a photo to this gallery
Retrieved from "https://fallout.fandom.com/wiki/Charnel_house?oldid=3224595"
Community content is available under CC-BY-SA unless otherwise noted.