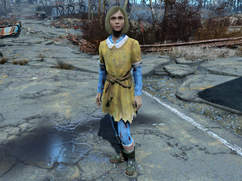 Charlie is a randomly encountered character in the Commonwealth in 2287. She is the daughter of Clinton and spends most of her time talking to him.

Upon being encountered, Charlie will talk to her father about a variety of topics. These topics can vary from the duo getting a dog, the death of her mother, and if Charlie can sleep with a light on that night.

This is a random encounter character. She may be encountered in the following locations:

Charlie appears only in Fallout 4.

The encounter is a reference to the novel The Road by Cormac McCarthy and the film of the same name.

Clinton and his daughter Charlie
Add an image to this gallery

Retrieved from "https://fallout.fandom.com/wiki/Charlie_(Fallout_4)?oldid=3178277"
Community content is available under CC-BY-SA unless otherwise noted.