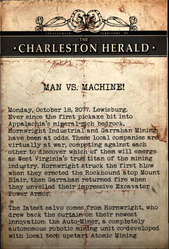 Charleston Herald - Man vs. Machine is a paper note in Fallout 76. It is a Charleston Herald article about the anticipated competition between Garrahan Mining's Excavator power armor and Hornwright Industrial's Auto-Miners.

Monday, October 18, 2077. Lewisburg.
Ever since the first pickaxe bit into Appalachia's mineral-rich bedrock, Hornwright Industrial and Garrahan Mining have been at odds. These local companies are virtually at war, competing against each other to discover which of them will emerge as West Virginia's true titan of the mining industry. Hornwright struck the first blow when they erected the Rockhound atop Mount Blair, then Garrahan returned fire when they unveiled their impressive Excavator Power Armor.

The latest salvo comes from Hornwright, who drew back the curtain on their newest innovation: the Auto-Miner, a completely autonomous robotic mining unit co-developed with local tech upstart Atomic Mining Services. Once this marvel was revealed, all eyes focused on Garrahan for their reply. But instead of releasing a technical innovation, CEO Vivian Garrahan has dropped a bombshell when she announced the ambitious "Man Vs. Machine" Challenge: 24 straight hours of rock-chewing mayhem which will directly pit Hornwright's Auto-Miner robots against Garrahan's own Excavator Power Armor equipped human miners. Although it's uncertain which company will emerge victorious, perhaps this will end the long-standing feud between these bitter rivals once and for all.

Garrahan Mining Headquarters
Add a photo to this gallery
Retrieved from "https://fallout.fandom.com/wiki/Charleston_Herald_-_Man_vs._Machine?oldid=3379468"
Community content is available under CC-BY-SA unless otherwise noted.