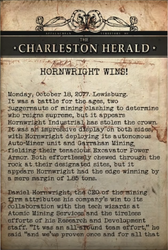 The note can be found at the Garrahan Mining Headquarters, beside the terminal on the CEO's desk.

Monday, October 18, 2077. Lewisburg.
It was a battle for the ages, two juggernauts of mining clashing to determine who reigns supreme, but it appears Hornwright Industrial has stolen the crown. It was an impressive display on both sides, with Hornwright deploying its autonomous Auto-Miner unit and Garrahan Mining fielding their tenacious Excavator power armor. Both effortlessly chewed through the rock at their designated sites, but it appears Hornwright had the edge winning by a mere margin of 1.85 tons.

Daniel Hornwright, the CEO of the mining firm attributes his company's win to its collaboration with the tech wizards at Atomic Mining Services and the tireless efforts of his Research and Development staff. "It was an all-around team effort," he said "and we've proven once and for all that the machine is truly superior to man. It's time to move on and look towards the future." Vivian Garrahan, CEO on the losing end of the battle had only this to say. "Our men did their best, and I'm damn proud of them. 1.85 tons is barely a truckload and I wouldn't call this a decisive victory." Sore loser or simply an inspired leader? This reporter is very interested to see what the future holds for Garrahan Industries.

Retrieved from "https://fallout.fandom.com/wiki/Charleston_Herald_-_Hornwright_wins!?oldid=3260777"
Community content is available under CC-BY-SA unless otherwise noted.