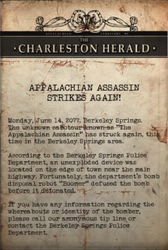 There are four copies spread throughout Berkeley Springs:

According to the Berkeley Springs Police Department, an unexploded device was located on the edge of town near the main highway. Fortunately, the department's bomb disposal robot "Boomer" defused the bomb before it detonated.

If you have any information regarding the whereabouts or identity of the bomber, please call our anonymous tip line or contact the Berkeley Springs Police Department.

In the Davis family apartment

In the brick building

In the clothing store

In Berkeley Springs West
Add a photo to this gallery
Retrieved from "https://fallout.fandom.com/wiki/Charleston_Herald_-_Assassin_strikes_again?oldid=3375212"
Community content is available under CC-BY-SA unless otherwise noted.