Upon entering from the western side of the capitol building, through a blue door in the area between two buildings, the player character is immediately met with Cutthroats decorations, including a Responder corpse, before turning left into another room. This was a reception area, with fencing and raider barricades added post-War. Heading south, there are two bathrooms: one on the right, while the one on the left has a hole in the wall leads to a larger room with a podium and discarded pews.

This leads into a hallway, from which one can access an office area converted into a clinic, sporting a chemistry station and some valuable medical equipment. The nearby staircase only goes downward, as the way up is blocked by rubble.

Downstairs is a state courtroom, used by the Cutthroats as a place to judge people from on high; literally, as the main desk and chair are stacked on top of debris to create a mountain looking down at a single chair where another Responded corpse lies. To the north is a side office containing the crime log terminal, and a camera pointed at a mannequin. Above the mannequin is chalk writing that reads "DUMM ASS."

Continuing north through a red door, there is an interrogation room with a jail cell and the corpse of Rosalynn Jeffries. Another hole in the wall opens up to the same hallway that led into the courtroom, just on the other side of a barrier. An area to the northwest was being used as a supply room. Several voter services terminals are here, as well. The black double doors at the end of the hallway are an exit. This section of the exterior is buried under a tunnel, and a button-operated exterior gate provides access to a wrecked bus that will lead out to Charleston once more.

The Charleston Capitol Courthouse appears only in Fallout 76, introduced in the Nuclear Winter update. 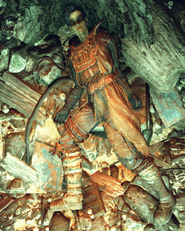 Interrogation: Doe, Jane
Add an image to this gallery
Retrieved from "https://fallout.fandom.com/wiki/Charleston_Capitol_Courthouse?oldid=3241249"
Community content is available under CC-BY-SA unless otherwise noted.