The Charleston Capitol Building is a location in the city of Charleston in Appalachia.

The State Capitol building was dedicated in 1932 and served as the seat of power for the Appalachian government. The building survived the Great War intact, as no bombs were dropped directly on Charleston. In the immediate aftermath of the war, surviving members of the West Virginia state government formed the Charleston Emergency Government in the Capitol Building under the leadership of a Provisional Council headed by Speaker of the House Abigale Poole while they waited for instruction from Washington, D.C.. No word from the Federal government ever came. By 2082, the Charleston Emergency Government had formed an alliance with the Responders and attempted to establish peaceful relations with the Brotherhood of Steel, Free States, and even the raiders. A flood caused by the destruction of Summersville Dam occurred on Christmas Day in 2082, devastating Charleston and presumably wiping out the members of the Charleston Emergency Government.

Charleston Capitol Building is the easternmost location in the ruins of the city of Charleston, the capital of former West Virginia. Mud and debris carried by the floodwaters unleashed by the broken Summersville Dam have buried the central plaza and blocked the building's front entrance. A large bell in the plaza has been marked with the Responders' emblem. There is a weapons workbench in a flooded generator room in the basement. The Charleston Capitol DMV and courthouse can be accessed from separate doors above ground, and the two buildings are also linked underground. However, both buildings have recommended levels that player characters should be at before entering, with the courthouse recommending Level 15 or higher, and the DMV and main capitol building recommending Level 30 or higher, due to the high level feral ghouls lurking within, while Scorched or super mutants will be in and around the outside of the courthouse.

The Charleston Capitol complex is one large dungeon, although on the surface it appears divided into three major sections, including the central building, the courthouse (west) and the Department of Motor Vehicles (east). The middle courtyard contains a historic bell.

The courthouse wing centers around the partially collapsed courthouse. The collapsed roof leads to the press briefing and conference room upstairs, which were converted into a triage and cooking area after the War. Adjacent to the courthouse is the Office of the Registrar and the Capitol Police offices, which include a small jail with holding cells and Rosalynn Jeffries, killed by the flood intended to avenge her apparent death. It's also a major stop during Key to the Past. In the back is the judge's office, which contains the location's steamer trunk and another locked safe.

At the western end of the central part of the Capitol is the office of the governor of the Appalachian territory, complete with a press briefing room where the governor would make televised appearances. Right before the rotunda are the offices that once served the governor, now filled with mud and trash after the flood wave propelled a truck through the wall.

The eastern part of the rotunda contains more ruined offices and a partially collapsed corner hallway. In addition, it contains a staircase that leads to the two upper floors of the rotunda. The second floor is derelict, with mostly abandoned offices. The third floor is more interesting, as it includes the offices of high ranking members of the pre-War government of Appalachia, including Speaker Poole's and Senator Blackwell's office west of the rotunda and Tanner Holbrook's office in the east.

The Department of Motor Vehicles is straightforward. There's one main chamber for visitors, together with a terminal that activates the bots (used to obtain a valid ID for registering with the Brotherhood) and the overseer's stash.

The basement is accessible through the elevator shafts or the staircase by the rotunda. It contains a flooded generator room in the west, complete with a weapons workbench. An abandoned food court can be found in the center that served as a food rationing spot before the flood. The filing, archives, and facilities rooms are located to the east, by the stairwell. There's an armor workbench in the machine room.

See: Notable loot inside the courthouse

The Charleston Capitol Building appears only in Fallout 76.

The Charleston Capitol Building is based on the West Virginia State Capitol, which is the seat of government of the state of West Virginia.

Teddy bear camp on the dome

Letter from the president 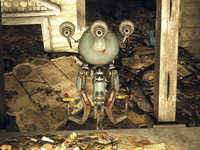 DMV Bot
Add a photo to this gallery
Retrieved from "https://fallout.fandom.com/wiki/Charleston_Capitol_Building?oldid=3504206"
Community content is available under CC-BY-SA unless otherwise noted.