See all:
Recruitment Blues
Into the Fire
Runner's High
The Missing Link
Coming to Fruition
Overseer's Mission
The Motherlode
The Bell Tolls

Fallout 76
“Charleston was the capitol of West Virginia and one of the largest cities in the area. Prior to the Great War, it was a hotbed of political dissent and saw countless protests for workers' rights.”— Fallout 76 loading screen

Charleston was the pre-War capital city of West Virginia.

The capital and one of the largest cities of West Virginia became the heart of a major push towards automation throughout Appalachia before the Great War.[1][2] Governor Evans, a strong proponent of automation and a corporate ally, pushed through measures despite stiff opposition from what unions remained, supported by politicians such as Senator Sam Blackwell.[3]

After the Great War, Charleston became the heart of Appalachian reconstruction. It escaped nuclear devastation and was intact, allowing an emergency government to form, using the Charleston Capitol Building as a foundation. Together with the first responders, what remained of scattered pre-War leadership began to rebuild.[4]

Problems with the sheer volume of refugees, however, forced them to deny requests for aid and supplies that could not be handled on the spot.[5] That included survivors from the Pleasant Valley Ski Resort and Top of the World. Humiliated and left without help, the survivors banded together under David Thorpe, a cold and brutal man who turned them into a terrifying raider warband.[6]

In 2082, a contingent of his raider group led by Rosalynn Thorpe attempted to attack the settlement, but were spotted early and routed by the Responders.[7] Rosalynn was injured and taken prisoner along with some of the other raiders.[7] The Responders hoped to negotiate the following day, but in retaliation, David Thorpe used a mini-nuke to destroy the Summersville Dam on Christmas morning, causing catastrophic damage to the town.[6]

In a flash, the Responders lost almost everything: Homes, supplies and most of their friends and family. Although they suffered under the devastation, they survived, keeping the idea of the Responders alive. Although the city was largely abandoned in the wake of this devastation, the Fire Breathers found it to be the perfect training environment.[8] In 2103, the only human resident of Charleston is Gnash.

Home to the Charleston Capitol Building. Other facilities and structures include Wade Airport, the Charleston Fire Department, Charleston Trainyard, AVR Medical Center and the Hornwright Industrial Headquarters. The aftermath of the flooding is still evident, its streets choked by mud and debris, and some buildings dislodged from their foundations. Super mutants and the Scorched roam the ruins, along with snallygasters and Grafton Monsters.

Charleston stretches through the valley west to east, bounded on the eastern end by the Summersville Dam and on the western by the Poseidon Energy Plant WV-06. Perched on top of the hill to the north is Wade Airport, while the Charleston Fire Department is on the southern slope of the valley, home to the Fire Breathers. In front of the Capitol Building, the West Virginian replica of the Liberty Bell can be found.

West of the capitol building there are several bridges both intact and collapsed across the Kanawha River. These bridges include the South Side Bridge near the trainyard and the West Charleston Bridge near the power plant.

The local newspaper was the Charleston Herald.

Charleston appears only in Fallout 76.

Charleston is based on the real world location of Charleston, West Virginia, the capital city of the state. The West Virginian Liberty Bell seen in-game is identical to that of real life, including the transcription on the placard.

Top down, no labels 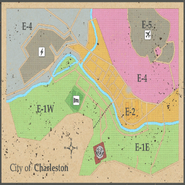 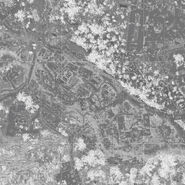