The Charles River[1][2] is a major river running through the New England in 2287.[3][4] It separates Charlestown and Cambridge from the rest of Boston.

The Charles is a winding river running through the New England Commonwealth. The river stretches from the southeast corner of the Glowing Sea to Boston Harbor, where it then reaches the ocean. Near the river's mouth, the city of Cambridge and the neighborhood of Charlestown in the north are divided from the rest of Boston in the south. Before the year 2285, the Battle of Charles River occurred, in which settlers from University Point played a significant role.[5] As of the year 2287 the river runs through 5 of the 12 major districts of Boston. A sign near CIT mentions the Charles River Launch is nearby.

Prior to the Great War, the USS Riptide was in the process of hauling military equipment to an unknown location upstream. It lays there in 2287, occupied with raiders. The Commonwealth Coast Guard also had a detachment located along the river, which had just intercepted a shipment of smuggled chems when the bombs fell.[6][7]

The Charles River appears only in Fallout 4.

The Charles River is based on the real world location of the same name.

One of many bridges passing over the river

A glowing one on a wooden raft on the river 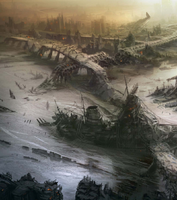