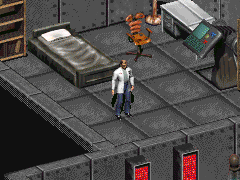 “That's preposterous. You're no more like me than a mutated, two-headed cow is like a normal heifer.”

Lt. Colonel Dr. Charles Curling is the scientist in command of the United States Chemical Corps in 2242.

Curling is a very tired looking man who wears a chemical-stained lab-coat.[1] Stationed on the Enclave Oil Rig off the coast of San Francisco, it is Curling's job to implement the Project to reclaim the world through total genocide. As part of the plan to reclaim both the mainland United States as well as the rest of the world, Curling was tasked with finding a way to modify the Forced Evolutionary Virus into a targeted killing machine. Using samples mined from the Mariposa Military Base excavation, Curling set about editing the virus.

Curling's efforts were ultimately successful, giving rise to FEV Curling-13, the Enclave's modified strain. However, evil sprung from evil. The new virus is no longer a vehicle of mutation but a lethal airborne toxin. Released into the jet stream, the virus would be carried worldwide, striking down anybody unfortunate enough to contract it. Curling's efforts were a success of such magnitude that he was explicitly mentioned in Richardson's State of the Nation address.

Aside from creating the virus, Curling and his staff worked on some FEV-infected subjects, including Frank Horrigan, an Enclave soldier who was stationed on Mariposa before he got infected. The modified FEV development was not the single result of these experiments, as Frank Horrigan was soon made into the ultimate killing machine and the Enclave's finest tool of warfare.

Naturally, the only way to employ such a weapon would be to have a safeguard against it. To that end, Curling and his team also perfected a vaccination against the modified FEV. Once the vaccine was distributed to Enclave forces, the eradication program was to be set in motion. By the time the Chosen One boards the oil rig, the Enclave is days from releasing the virus.

In one way or another, Curling met his end on the oil rig during the final events of Fallout 2. Whether killed by the Chosen One's hand or when the rig exploded, Curling was removed from history and his efforts removed with him. With the rig's explosion, Curling's legacy of a deadly form of FEV was erased and never noted following the rig's destruction. As far as the dwellers of the wasteland were concerned, Curling never existed.

Charles Curling appears only in Fallout 2.

Retrieved from "https://fallout.fandom.com/wiki/Charles_Curling?oldid=3072998"
Community content is available under CC-BY-SA unless otherwise noted.