Success to persuade in dialogue
Prices when you Barter

“A combination of appearance and charm. A high Charisma is important for characters that want to influence people with words.”— Fallout in-game description

Charisma is one of the seven primary statistics in the SPECIAL system.

In Fallout 2, Charisma also determines the number of base companion slots the player character is given. This number is equal to their Charisma score divided by two, rounded down. As an example, with a Charisma at five, two can be recruited. Please note that one companion can still be recruited (in a few cases) even with the lowest Charisma score.

In Fallout Tactics, Charisma is, at best, a secondary trait. Due to the nature of the game (i.e. almost exclusively combat-based), it is feasible to complete the game easily with 1 or 2 Charisma with no penalty. The only role is that when the Warrior starts with Charisma of 10, their rank is Senior Initiate, rather than Initiate. It is involved with the Barter skill and promotions, and is required for the Leader and Divine Favor perks. A low Charisma, on the other hand, gives access to the Loner perk.

Ways to increase Charisma in Fallout

Ways to increase Charisma in Fallout 2

Charisma increases the disposition of all NPCs, which makes Speech checks easier. Disposition is also affected somewhat by Karma (most NPCs like good characters more), quests (doing a quest in a way an NPC likes can dramatically boost disposition), and dialog options (being a jerk in conversations can lower disposition a little). Charisma also affects Barter and Speech skills. Characters who use Speech will want at least a decent Charisma, but adding points to the skill are almost always better than adding points to the score. Characters who do not use the Speech skill have little use for this SPECIAL score.

There are also general Charisma checks in dialogue with some characters, in addition to Speech checks. Avoid wearing things like Enclave Power Helmets, as they deduct 1 point of Charisma while equipped.

Charisma in New Vegas modifies Barter, Speech and Companion Nerve. Companion Nerve gives each companion in the party +5% to their damage and armor, up to a maximum of +50% at 10 Charisma.

Regardless of Barter or Speech level, some interactions will not be available with a too low Charisma (Ex. Corporal Betsy). These ultimately do not have any significant effect on gameplay, nor do they provide any special bonuses.

“Charisma is your ability to charm and convince others. It affects your success to persuade others in dialogue and prices when you barter.”

Charisma influences several game mechanics. It directly controls your ability to charm and convince others, replacing the Speech skill in governing one's chance of successfully persuading in dialogues. It also replaces the Barter skills from previous games by governing the prices you get from trading with merchants.

In Fallout 4, Charisma also governs access to the following perks:

Effect on a settlement

Charisma affects the maximum amount of settlers allowed at a settlement:

Charisma affects the chance of passing a speech check:

Additionally, each rank of Lady Killer or Black Widow adds 10% if the target is of the opposite gender. The final result of the Chance to Succeed formula is limited to a minimum of 5% and a maximum of 100%, so there is always a slight chance of success.

One has a 100% chance of success to pass a Red check with a Charisma value of 11 or higher; this includes all clothing, armor, and drug effects.

Multiply the modifier from Charisma and all applicable modifiers above to get the (near) final modifier.

To get the best prices:

These factors are multiplicative and not additive; for instance, rank 2 cap collector gives a 1.32 selling modifier. Friend Discount is when the player character gets better prices from a vendor for completing a quest. For example, returning the locket to Connie Abernathy's husband unlocks a Friend Discount with Connie. Other vendors may have the same or other discounts.

Combined with all base game items a maximum Charisma of 32 can be reached, while with all add-ons included 48 is the maximum.

A base charisma of 12 can be achieved:

Several items grant bonuses while equipped for a maximum of +18 increase to Charisma:

The summer shorts +2 fills outfit and chest armor slot that can be used instead of Green shirt and combat boots and the Sharp chest piece to preserve weight.

Vault-Tec Workshop: the barber chair provides a semi-permanent boost of +1 Charisma that is lost when choosing to use one of the other statistic boosting workshop items.

“Charisma is your ability to lead and help others. It allows you to share higher point Perk Cards and also affects your rewards from Group Missions and prices when you barter.”

Sharing a perk card requires the player character to have a Charisma that is three times the rank of the card.

Charisma affects item buy/sell values; the value of an item for buying or selling is its innate value multiplied by either the buying price modifier or the selling price modifier. While Hard Bargain will increase Charisma during bartering, it provides less benefit for those with higher charisma.

Selling items to vendors caps at 25% of the item's value, the buying modifier caps at 175%, and items will be purchasable at this price with 25 Charisma.

Charisma affects how efficient a dweller is while working in the living rooms, radio studio, and barbershop facilities. It can be increased on different dwellers by assigning them to the lounge.

Unlike other games, Charisma is not treated as a variable ranging from 1 to 10, but instead as a token that can be obtained at the start or when leveling up. A player character with the Charisma token gets free rerolls during certain tests and can also recruit certain companions from the shop.

Fallout: Tactics
Add a photo to this gallery 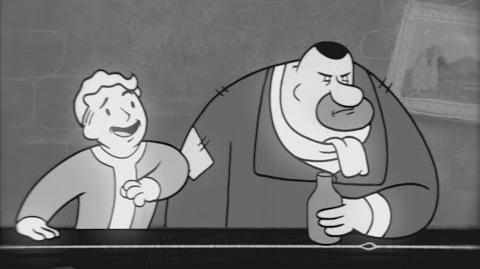 Retrieved from "https://fallout.fandom.com/wiki/Charisma?oldid=3489557"
Community content is available under CC-BY-SA unless otherwise noted.