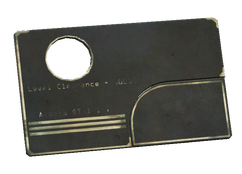 Brooks in Far Harbor is the only merchant who accepts the card, and he will give the player 100 caps in exchange for it.[9]

Dumpster with the charge card, in the background Fort Strong.
Add an image to this gallery

Retrieved from "https://fallout.fandom.com/wiki/Charge_card_(Fallout_4)?oldid=3207123"
Community content is available under CC-BY-SA unless otherwise noted.