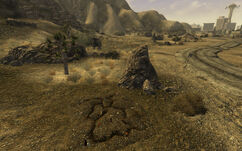 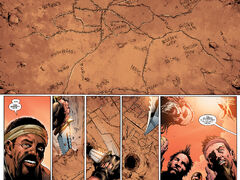 Chance's Map above Red Rock Canyon, as depicted in All Roads 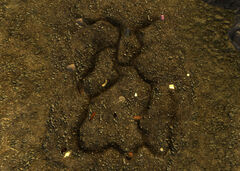 Chance's map is a location in the Mojave Wasteland, close to Nevada State Route 160. It consists of a map drawn in the dirt.

This map was carved by the blade of Chance's knife and McMurphy's finger in the graphic novel All Roads, though the locations are noticeably different to what appeared in the game itself, and originally included no props for locations. Conversely, notable locations had their names or acronyms drawn in the dirt. The map is located overlooking the Red Rock Canyon, rather than resting outside of it near a highway. It is likely nothing more than another continuity error between the graphic novel and the game.[1]

The map is located northwest of Nopah cave and Vault 3. It exists as a small enclosure with the map drawn on the ground near a hollowed-out rock containing some minor loot with "the sun is killing me" written on it. The map is littered with items that vaguely represent locations or landmarks that are important to the map. None of the items may be picked up, however. Fast traveling here may spawn a Legionary assassin party, depending on the Courier's reputation with Caesar's Legion.

Chance's map appears in the graphic novel All Roads and in Fallout: New Vegas.

Retrieved from "https://fallout.fandom.com/wiki/Chance%27s_map?oldid=3165554"
Community content is available under CC-BY-SA unless otherwise noted.