Chance's knife, as depicted in All Roads. 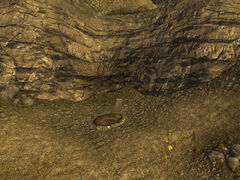 Chance's knife is a unique weapon in Fallout: New Vegas, and a centerpiece of the graphic novel All Roads. It is a unique variant of the combat knife.

This knife belonged to Chance, one of the Great Khans and a prominent character in the graphic novel All Roads. It has a dark blue grip and the blade is still stained by the blood of the Fiends it last killed at the tribal village. Because of the fact that it is near Goodsprings, if the player character can survive the nearby cazadores and has a shovel, this weapon can be acquired at a very early level.

Chance's knife qualifies as an improved holdout weapon, meaning that if the player has a Sneak skill of 50 they can carry it into casinos and other restricted areas.

It has a special Back Slash attack, which does 70% damage in V.A.T.S. at the cost of 3 fewer action points (requires a Melee skill of 50).

Chance's knife can successfully strike about 445 times from full condition before breaking.

In the novel All Roads, Chance used his knife to carve a map of the settlements in the Mojave Wasteland. He also used it to kill multiple Fiends at the tribal village before being fatally wounded.

Retrieved from "https://fallout.fandom.com/wiki/Chance%27s_knife?oldid=3430901"
Community content is available under CC-BY-SA unless otherwise noted.