The chainsaw is a weapon in Fallout 76.

As an automatic melee weapon, it attacks similarly to other chainsaws. The chainsaw found in Appalachia is a Romington-brand Super 76. The chainsaw is listed as a weapon only, making it incompatible with any melee weapon buffs or perks. The damage will not scale with Strength.

The chainsaw is missing keywords for melee and two-handed melee, making it incompatible with any weapon class-specific buffs or perks. [verified] 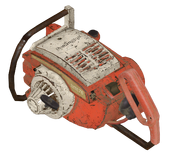 Retrieved from "https://fallout.fandom.com/wiki/Chainsaw_(Fallout_76)?oldid=3520771"
Community content is available under CC-BY-SA unless otherwise noted.