Fallout: New Vegas
“Heh. Well, the only place I know of locally would be Cerulean Robotics, but that place has been overrun by vermin for years. If you want to check the place out, you can find it on the west side of Freeside. The entrance is on the back side of the building.”— Ralph

Cerulean Robotics is an abandoned building in Freeside in 2281.

This building is located in the southwest of northern Freeside. To reach this area coming from the north, enter Freeside via the north gate, walk past the Old Mormon Fort and head under the broken highway on the right towards the city wall and the ruined store. Progressing past the ruined store will lead to a small gap in the concrete piles to the left. Through the gap and to the right is the Cerulean Robotics building.

The building consists of several rooms spread over a single story. The building is inhabited by seven giant rats and four broken Protectrons, as well as the sexbot Fisto, controlled by a terminal requiring a 50 Science skill to unlock.

The Cerulean Robotics key is found in the room to the right of the entrance. It's on the floor in the southern corner of the room between the couches, in the hand of the skeleton near the TV. This key unlocks the tool cabinet, found in the north corner of the building, containing the terminal access card. Without the key, the cabinet is secured with an Average lock. The terminal access card is used on the "Protectron programming interface terminal" if the player character doesn't have prerequisite Science skill. The terminal is used in the Wang Dang Atomic Tango quest to program Fisto. There is a reloading bench and a workbench with several pieces of scrap metal and sensor modules in the building.

With the Wild Wasteland trait, upon leaving the building, the Courier may be attacked by three old women known as Maud's Muggers. They are all wearing matching pre-War spring outfits and are armed with rolling pins, knives and switchblades. The names of the three are Irate Ida, Malefic Maud, and Rancorous Ruth. They sometimes spawn before entering the door, without ever having to enter the building. 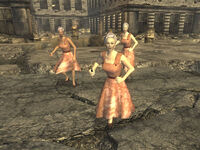